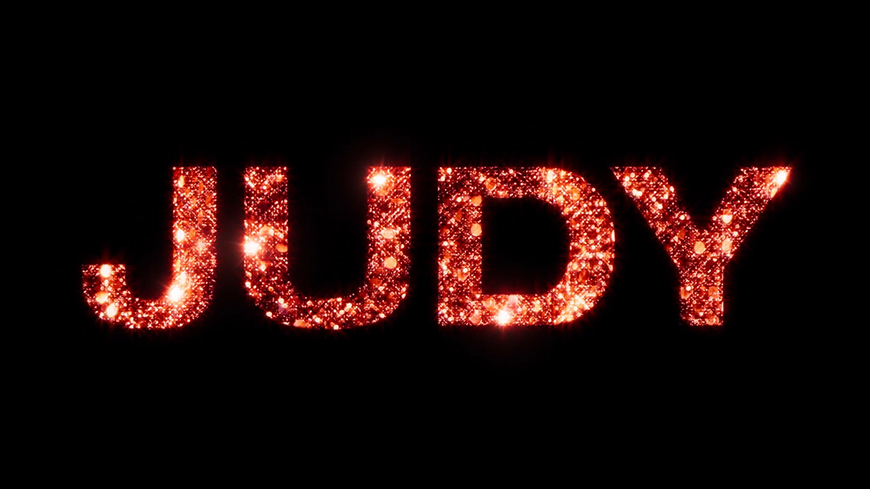 We were commissioned to create the titles for the Judy Garland biopic, “Judy” starring Renée Zellweger. The film focuses on the later life of Garland following her last series of sold out concerts in London during 1968. Director, Rupert Goold, wanted the titles to reflect the glamour associated with her stardom and her performances, but in such a way that they wouldn’t appear gaudy or sensational and sympathetic to where we find Garland later in her career.

In finding a solution, we considered a wide range of the iconic images that the name ‘Judy Garland’ instantly conjures, although the majority were too obvious to use in a literal sense. Rupert Goold and Producer, David Livingstone, were also keen to feature an element from ‘The Wizard Of Oz’ as a starting point, given it indisputably catapulted Garland to stardom at such an early age. Undeniably, one of the most enduring images from that film, is Dorothy’s red sequin shoes. We decided on a minimal concept, using the red sparkling sequins from the shoes to fill the letters in her name – sized to fill the screen, embodying the enormity of her legendary status. The animation of the title begins big and bright but slowly moves away from the viewer as the sparkling lights eventually fade, and take the viewer into the following scene.

The sparkling sequins also became the motif adopted for the other titling and credits in the film, using colours that reflect the scenes they feature within. We built the titles, using filmed elements, combined with various effects and animation using Adobe After Effects. The result is a glamourous but discreet set of titles.